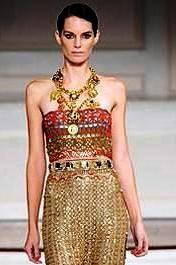 Find how ancient Egypt style has influenced arts and culture in 20th Century design, costume and films.Â  “Eternal Style: Fashion and Decorative Arts in Ancient Egypt and Their Influence into Modern Times” is a mini-symposium co-producedÂ  by the CSO with the Society for the Study of Egyptian Antiquities (SSEA).

There will be lectures by experts in the field, with a break for lunch after the first two ofÂ  four speakers; these include talks by Martha Mann, freelance costume and set designer for film and stage, and Brian Musselwhite, curator of the ROM’s European Department.